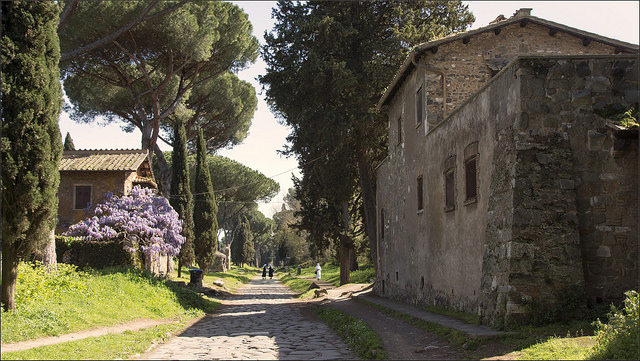 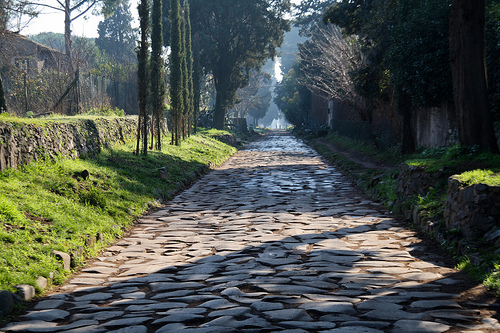 Via Appia is one of the oldest, suggestive and rich streets in Rome. That is why we, LeadingRoma, have decided to organize an Appian Way Extended Bike Tour, dedicated to the hidden wonders in this street that links some of the most beautiful places in the history of ancient Rome.

Our bike tour will begin with the discovery of the Baths of Caracalla, in what perhaps was the largest bath complex in the ancient Rome. Located near the beginning of Via Appia, the Terme di Caracalla still have much of the original structure dating from 306 AD, and today they attract hundreds of thousands of tourists each year as a museum and location for many shows, especially in summertime.
Immediately after the Baths of Caracalla, we will visit Porta San Sebastiano, one of the most beautiful, most preserved, Aureliano’s wallcuts.
Built around 275, it has its name for the proximity to the catacombs of San Sabastiano, indeed.
After it, we will focus on the Aurelian Walls.

The Aurelian Walls are considered the greatest defense the Roman empire had against the raids of the barbarians.
Built through the will of the Emperor Aureliano in 270, today we can still look at them in all their splendor, despite the passing of the years and the numerous suffered interventions.
The original length was 19 km, today there are about 12.5 km.
The Aurelian Walls are among the longest and best preserved wall enclosures around the world.
The fourth stop of our tour will be the Via Appia Antica.
Appia was considered the queen of the streets in the ancient Rome, connecting the capital to Brindisium, the current Brindisi, home to what perhaps was the main port in ancient times, especially for trade in the East.
Its construction began in 312 BC by the desire of the Appio Claudio Cieco censor and it is still considered to be one of the greatest engineering works of the ancient world.
Some traits, nowadays in the Roman suburbs, are still a viable and they are the destination for archeology enthusiasts around the world.

Between Via Appia Antica and Via Ardeatina we will find the Catacombs of San Callisto, comprised in an area of ​​about 30 hectares.
The Catacombs of San Callisto are considered the first real cemetery of the Roman Community.
Their creation dates back to the end of the 2nd century and their name comes from deacon Callisto, the person commissioned by the Pope to administer them.
It was here that more than 50 martyrs and 16 pontiffs were burial.

Always located along the Via Appia Antica and an integral part of our bike tour is the Ninfeo of the Villa dei Quintilii.
The Ninfeo was built on a lava tongue created by ancient eruptions of the Lazio Volcano around the 2nd century.
As Roman custom, the names of the owners of this wonderful structure were found on the lead pipes: it was Sesto Quintilio Condiano and Sesto Quintilio Valerio Massimo, consuls and large landowners who were killed by Commodo on the charge of having conspired against he.
Numerous emperors succeeded in it until the third century when it then became part of the Church’s possessions.

Next stop of our journey will be the Aqueduct Park. (To agree with the guide)
With about 240 hectares it is one of the largest parks in the capital.
The name comes from the presence of 7 aqueducts, raised and underground, which supplied all the Ancient Rome.
In 1986 it was likely to disappear because of building speculation, but thanks to a city committee it was included in the Regional Park of Appia Antica.

Another beautiful park in the area is certainly the Caffarella Park.
Also known as the Caffarella Valley, it is an alluvial landscape created by the flow of the Almone River.
It extends from Via Appia to the Via Latina and has the name of the family that owned the great property.
It is one of the largest green areas in Rome, 132 hectares.
Inside there are wonders such as the Colombario Constantine, the Ninfeo of Egeria and the Church of Sant’Urbano at Caffarella.
The Ninfeo of Egeria, located within the Caffarella Park, included a sacred forest among the most important and ancient of ancient Rome.
Legend tells that Egeria, one of the Cameneo nymphs, was a lover of Numa Pompilio and, after the death of the beloved, she melted into tears, giving birth to the source at Porta Capena.

We are now ready to go back to our starting point ending our Appia Antica bike tour.

Choose to discover the hidden wonders of the Eternal City with us at LeadingRoma, with our tours, biking and walking, that will let you know and admire the most beautiful and suggestive parts of the city without leaving anything to chance.