Discover the timeless charm of Rome 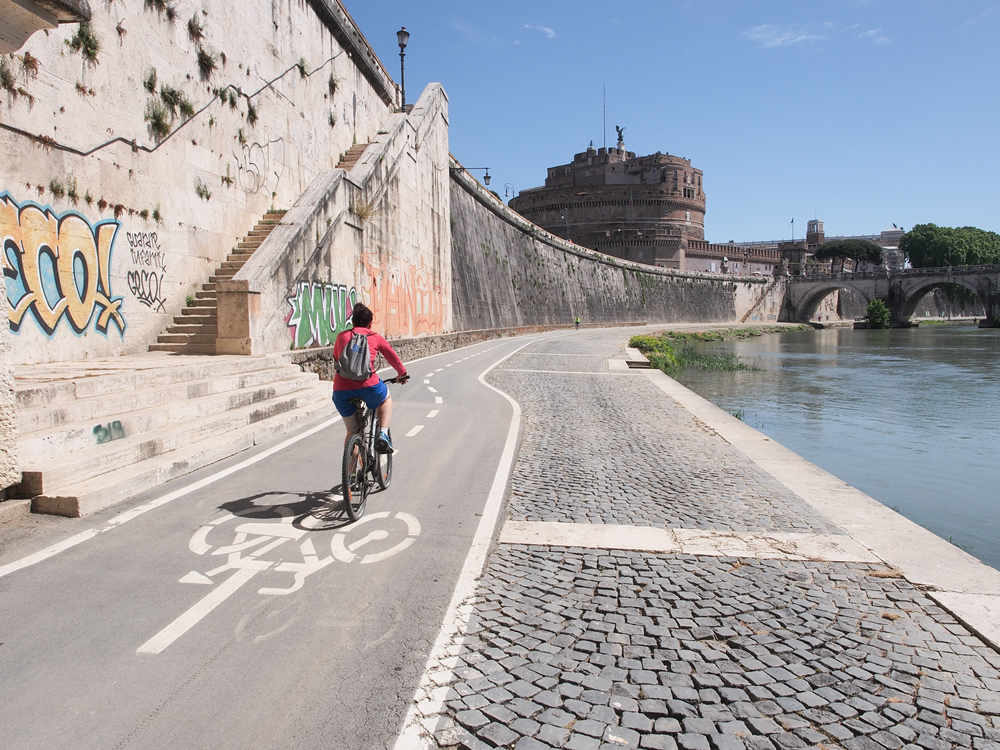 In Rome, history and modernity travel together, creating a true work of art. Why not enjoy all these marvels by bicycle? In addition to a deep respect for the environment, the bicycle will allow you to fully enjoy the infinite beauty of the eternal city, avoiding crowded public transport, suffocating hot in the summer, endless running walks in the sun. Within a wide range of organized tours, we at Leading Roma offer you the Blue Tour, a real full immersion within the millennial Roman history, perfect for those who want to know the details and facts of each stop.

We will start our bike tour named Blue Tour at Campo de Fiori, one of the most renowned and recognized squares of the entire Romanesque cultural and artistic landscape, situated on the borders between the Parione and Pergola wards.
The legend tells us that the name of this square comes from a woman profoundly loved by the Roman warrior Pompeo, Flora. There is, however, another version that places the origin of the title from the presence in the site – up to the 5th century – of a large quilted area of ​​cultivated gardens and flowered meadows.
Today, there are two distinct moments that characterize Campo de Fiori. In the morning, with a typical Roman market, and in the evenings, where the Roman piazza becomes a real meeting point for young people, thanks also to the massive presence of venues.
We will continue our journey to Piazza Navona. Considered the most elegant and artistically valuable square in Rome, Piazza Navona was born from what remained of the Domiziano Stadium. In antiquity it was intended for recreational competitions and sporting games; today it is crowded by street musicians and artists who cheer up the thousands of tourists who daily crowd this place.
We will continue to dwell on the Bramante Cloister, part of the Church of Santa Maria della Pace. Built by Bramante, between 1500 and 1504 for Cardinal Oliviero Carafa, the Cloister is one of the major works of the 16th century Renaissance.
Today it hosts numerous art exhibitions.
After our visit to the Cloister, we will continue crossing Via dei Coronari. Among the most famous streets of the capital, Via dei Coronari has a total length of about 500 meters. This historical street in Rome is very famous for its presence in numerous Italian movies, including “Identification of a Woman” by the great director Michelangelo Antonioni. Its birth dates back to the Middle Ages, when it was very popular with pilgrims traveling to St. Peter’s Basilica. The frequent attendance of these gives this street the current name, with the word “Coronari” to be associated with the crowns and rosaries that these pilgrims carried with them during the Roman pilgrimage.
We will leave Via dei Coronari to reach Ponte dell’Angelo, a bridge made up of five splendid arches that connects the Vatican with the Piazza di Ponte Sant’Angelo. Its construction dates back to the reign of Emperor Adriano, who ordered his construction to allow Roman citizens to visit his mausoleum.
Heading down Lungotevere tor di Nona we will arrive at the Museo dell’Ara Pacis, a modern structure that, more than being a temporary exhibit theater, houses the altar dedicated by Augustus in 9 BC to Peace.
After the Ara Pacis, we will pass through Piazza del Popolo.
The fifth stop of the tour, Piazza del Popolo, is the meeting point of the three main Roman roads: Via Ripetta, Via del Corso and “Il Babuino”.
It is Porta Flaminia which, welcoming visitors with the direction “Felici Faustoque ingressui”, allows entry to one of the symbols of Rome.
Often frequented by characters such as Pasolini and the poet Trilussa, is dominated by the Obelisk Flaminio, the oldest obelisk in the capitol city.
Another place to visit is the Church of Santa Maria del Popolo, erected on the burial area of ​​Emperor Nerone, responsible for the unfortunate fire.
With Porta Flaminia behind you, you will be in front of Via del Corso, the ultimate street of the Roman shopping.
Going down, we will find Via Condotti, a cross street in Via Del Corso, which encloses numerous brands of clothing and design.
Via Condotti ends in one of the most beautiful and suggestive squares in Rome: Piazza di Spagna. No need to present Piazza di Spagna, another symbol of Rome. The Bernini Fountain gives to the latter an indescribable grace, with the Trinità dei Monti scale on top of which you can enjoy a wonderful and evocative view.
Then we will move to Lungotevere in Prati to reach Castel Sant’Angelo. Located on the right bank of the Tiber River, Castel Sant’Angelo is just a few hundred meters from Vatican City.
Completed by Emperor Antonino Pio, it was initially used as a mausoleum for his predecessor Adriano and his family members.
We will go down Corso Vittorio Emanuele II, built in 1886 and dedicated to Vittorio Emanuele II, the first King of Italy, and we will arrive at Piazza dell’Oro, whose name derives from the homonymous Dell’Oro family.
We will go to Via Giulia, another historical street in Rome.
Via Giulia has a total length of about one kilometer and it was designed by Pope Julius II specifically to cross the heart of the city.
The last stop of our tour will be Campo de Fiori, an extremely typical and particular area of ​​Rome: theater of a charming regional market in the daytime, meeting place of many young Romans in the nighttime.

Come to know all the wonders of the eternal city with Leading Roma, you will make a unique and unforgettable experience, biking through all the wonderful places full of history of this beautiful city, without thinking of stress, traffic, public transport and long walks under the blazing sun.